Telephone numbers on business cards: legible or conform to standards? 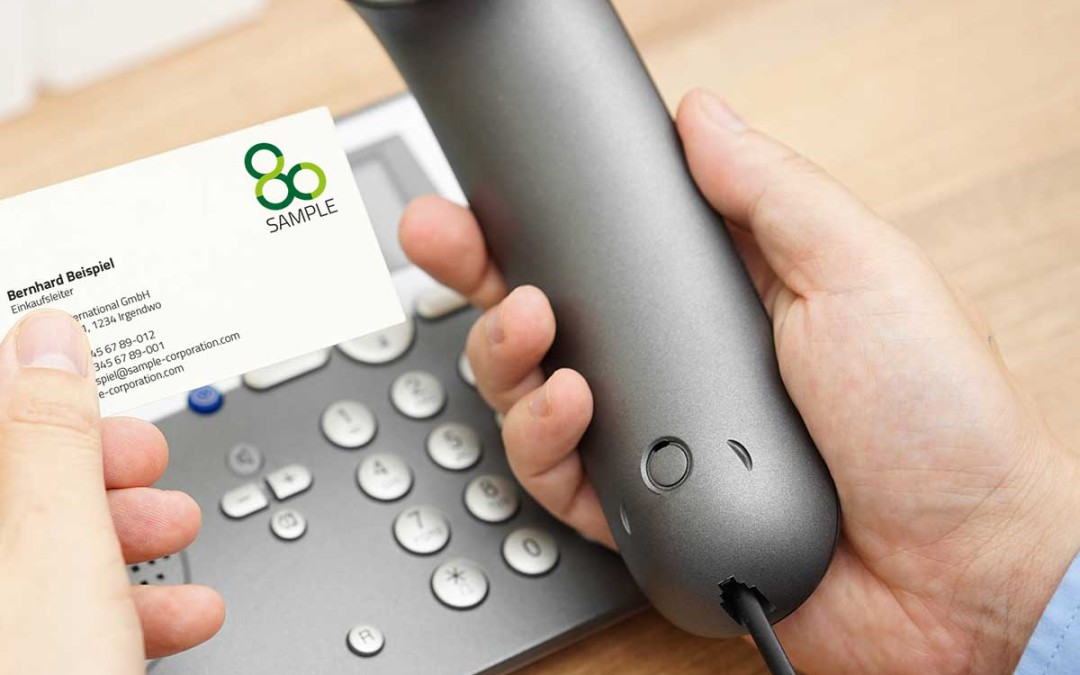 How are telephone numbers correctly set on business cards? A question to which – again – there is no universal answer. Firstly, there are several recommendations, and secondly, even the standards do not guarantee optimal legibility. Here are the most important rules – and a simple recommendation at the end.

Hardly any other element on business cards is represented as inconsistently as the telephone number: +49 or 0049 as country code? A (0) before the area code or network code? The area code separated with brackets, a slash or not at all? Or rather with a hyphen or, very stylish, with a dot? Grouped numbers or no grouping? A hyphen before the extension number? This way one and the same telephone number can take on entirely different forms:

If you combine all conceivable variants, the list continues almost endlessly. Thus raising the question: Is this not standardised? Yes, it is, however, there is more than one:

In Germany, DIN 5008 applies, and is actually quite simple:

Of the above examples, therefore, only the 5th variant conforms to DIN standards:

If the number is only published in Germany, the following spelling would also be correct:

The Guideline E.123 of the International Telecommunication Union looks pretty similar. However, the extension is separated from the number simply by a space, not by a hyphen. In addition, the main number can be grouped (e.g. into blocks of 2 or 3) to improve readability. However, according to the E.123 recommendation, the groups should be separated by smaller spaces than the main groupings, i.e. like this:

For numbers used only in national territory, E.123 proposes the following:

However, this spelling does not make sense in countries where the area code must always be dialed (e.g. Switzerland).

On the Internet, however, the syntax after the URI (Uniform Resource Identifier) “tel” is relevant. Just as, for example, every website can be found via its globally unique URL, every international telephone number that is noted down according to the URI is globally unique. According to this standard, there must be no spaces, but the main groups may be separated by hyphens:

To make matters worse, independently of these three recommendations exist typographical rules for the structure of numbers in the pleading. The Print and Media ABC 1/49 of the german central expert committee regarding vocational training suggests on page 26 that the figures should be divided into groups of two, beginning on the right, with a reduced distance between the pairs – not a really clean solution either:

The mere fact that several standards or recommendations exist gives you some leeway.  So as long as you use one of the variants above, you are not doing anything wrong. But these guidelines are not a law either. For example, if your corporate design provides for points as structuring elements, this will certainly be understood:

Only parentheses and slashes have become quite out of fashion recently and should be avoided.

We at prinux generally recommend the DIN standard 5008, optionally with phone numbers grouped as desired. Area codes and extension numbers should never be divided into small groups.

So for an ordinary number

If a special grouping helps with memorizing, it should definitely be used:

The most important rule for companies is: Once the telephone number format has been defined, it should be strictly adhered to on all company business cards.

With self-service portals such as prinux, this naturally leads to the question: how do you make sure that all those ordering always enter the numbers exactly the same? Answer: They simply don’t have to. Because the prinux solution automatically handles uniform formatting in the background – no matter how a number is entered. For example, 0049 (0) 1234-98 76 543 DW 123 automatically becomes +49  1234  987 65 43-123.

(* The correct spacings, which are conventional in typesetting, can only be displayed on the web to a limited extent. To indicate “normal” and “reduced” spaces, different numbers of spaces have been inserted in this article.)